Dewfall is a story about a prince, named Dewabrata, who made a journey to find the magical flower utpala or the blue lotus, which can cure all hatred and bring back love to humanity. In his journey he met a beautiful princess Dewi Amba and they both fell in love. He also helped a village woman who later will become a warrior, named Wulandari. She loved Dewabrata, but gently he showed her that he already gave his promise to another woman. What Dewfall is actually all about? It is about a spiritual journey of every human being to find happiness and the purpose of his or her life on earth. Those are two things we want most as human beings: happiness and meaning. Dewfall will show us that the journey is unique to its individual as each one learns to see the spark of divinity in one’s soul. 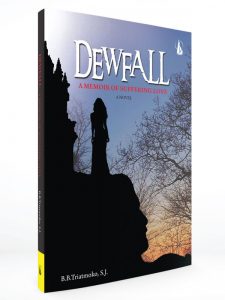 Benedict B. Triatmoko, SJ was born in Tanjung Balai Karimun in 1965. He entered the Jesuit novitiate in 1984 and was ordained priest in 1994. From 2000 to 2009 he was the director of the Academy of Machinery Industry in Surakarta. In 2009 he was named the head of the Academy of Machinery Industry Foundation. He was trained in Philosophy, Theology in Jakarta and Manila. He took special studies in Manufacturing Technic, Computer Science, and Business Management in Boston, USA.