Stories of Saint and Animals

The stories of friendship between human and animals are always interesting to read throughout the ages. This book is a collection of stories of saints and animals. The stories include the conquest of beasts that harm human being with the help of God’s power, the sincere friendship between human and animals, being cherished by animals because of pity and purity of the heart. Also, stories testimony of Christ’ followers through miracles in animals. Hopefully, by reading the stories in this book, we and particularly our children will be able to follow the saint’s kindness. Moreover, our faith in Christ will develop and grow mature. 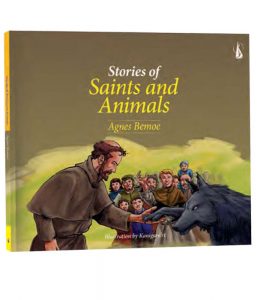 Agnes Bemoe was born in Surabaya, June 15, 1968. She started being a writer since July 2010. Her first book was published in December 2010. After that, she had written several children’s books.

Fajar Sungging graduated from Indonesia Institute of Arts, known as Institut Seni Indonesia (ISI) Yogyakarta, Department of Fine Arts in 1996. Since then, he has been working in the field of design and photography. Since 2004, he has been written graphic novels, such as Godam Reborn 1-3, several comics’ compilations, and comic about struggling: tThe Long March of Siliwangi Division. Now he prefers writing stories for comics, including comic strips for Kompas newspaper since 2013.